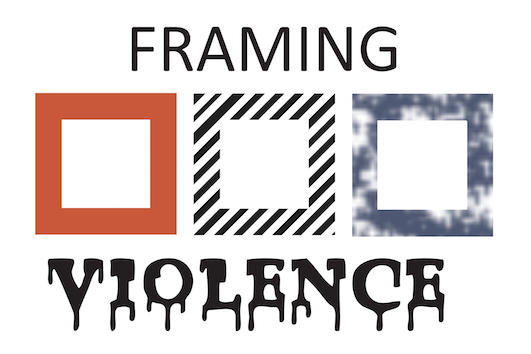 Violence can take the form of a physical or verbal act of aggression, be inherent to an institutionalized practice, can be perpetrated and experienced. Attitudes towards violence (for example, whether an act of war is ‘justified’) can hold very different if not competing implications. How violent acts are perceived, mediated, and thought about — in short, how they are framed — can have a significant impact.

Frames can therefore serve as a useful unit of analysis in conceptualizing the various aspects of violence, both as a mode of communication and as a cognitive schema. Yet there are few terms in academia so amply used yet continually contested; the definition and application of ‘framing’ differs widely between and within disciplines. Frames can be understood as mobilizers around which political and social coalitions might form, or as the mode through which actors and institutions compete over diverging interpretations of reality. In visual media, frames literally shape how reality is perceived, through the selection of what is included and what is left out of an image. Similarly, they can serve as an essential structuring device in all manner of narratives. Frames can convey emotions and experiences. More broadly, they may be described as heuristic devices and as part of cognitive schemata and knowledge networks.

Based on the idea that the range and fractured nature of the paradigm of framing can be turned into an advantage, the goal of this workshop will be to distill and discuss multiple disciplinary perspectives. We are guided by the overarching question of how the combination and juxtapositioning of these understandings can lead us to a richer conceptualization of violence as a phenomenon.

Topics may include, but are not limited to, the following areas of interest:

Violence against indigenous women in Canada: frames under the Harper government

Framing Violence – The Bundestag debates the 2015-riots in Frankfurt

The Ferguson Protests in the context of civil disobedience and racism: A quantitative and qualitative frame analysis of American media coverage

Framing and Ideological Legitimation: A comparison of the visual and textual representation of violence in the Jasmine Revolution and London Riots
---

Chuck Palahniuk’s Fight Club and the ‘Quest for Excitement’: Using Norbert Elias to Explain the Attraction of Fictional Violence

Poetics as Self-defence: Amiri Baraka at the End of the World

Moral Disengagement in media and Moral Identity activation: their interactive effect on support of war
---

Why Benghazi, Why Not 9/11? Framing Violence and Scandals in US Foreign Policy
---

Framing Violence Through the Intermedial Dynamic of Photography and Graphic Literature

Cage, Platform and Frame: The Haitian Revolution as a Philological Dispute

Resisting the Script, Scripting Resistance: Literary Responses to Fear, Impunity, and Militarization at the Mexico-US Border
---

Towards Post-Terrorism? From Orientalism to 'Divine Violence’
---

In Cooperation with the Chairs of Political Science and Computer-Mediated Communication at the University of Passau.