The Terra Visting Professor at the John-F.-Kennedy Institute, Laura Katzman (James Madison University), has offered the following courses on American Art in the winter semester 2018 and the summer semester 2019:

This seminar examines the visual culture of thirties America, in the context of the economic crisis of the Great Depression and the rural devastation wrought by the Dust Bowl that ravaged much of the American South and the Midwest. We will investigate the unprecedented role the New Deal government played as art patron, with the establishment of federal art programs that commissioned artists to create public murals, sculpture, graphic art, design, photography, literature, film, theatre, dance, and music, which aimed to bring art to the “masses” and construct a distinctive national culture. Contemporaneous debates about government support for the arts, cultural democracy, and national identity, will also be studied, along with recent scholarly approaches to New Deal art that consider perspectives of race, ethnicity, class, and gender. Other topics of discussion will include: the political radicalization of artists; art as weapon against war and fascism; and art and the labor movement. We will analyze artistic approaches associated with the broad phenomenon of American scene painting, ranging from regionalism to social viewpoint. Particular attention will be given to the pervasive documentary impulse of the era, as exemplified by the iconic photography commissioned by the now legendary Resettlement Administration/Farm Security Administration (RA/FSA).

This seminar examines the artistic, social, historical, political, and philosophical issues in public art at critical moments in the history of the United States, from the early Republic to the present day. We will investigate the nature of public art, its uses and functions, as well as civic and official attitudes towards art in the public sphere. Particular attention will be given to issues of censorship, propaganda, and the “culture wars” that emerged in the 1980s and 1990s, as they relate to on-going, heated debates over government support of the arts. Many of our sessions will focus on commissioned monuments and memorials, looking at the ways in which Americans remember, articulate, and memorialize their past. Given the highly contentious debates that have exploded in recent years around Confederate monuments and Civil War commemoration, we will probe the multi-faceted national discussion about America’s slave history and the legacy of racism in contemporary U.S. culture. As Berlin is a city with a renowned memorial culture, cross-cultural comparisons between German and American public monuments will be an essential part of this seminar, as will field trips to iconic and lesser known memorials in the German capital.

A Social History of Photography in the United States (BA Course)

This course examines the history of photography in the United States, considering the aesthetic, technological, social, cultural, and political factors that contributed to the development and practice of photography from its beginnings in 1839 through the mid- twentieth century. Particular emphasis will be given to the relationship between photography and society, the role that photography has played in shaping ideology, informing collective memory, and constructing historical narratives, as well as the ways that photographs have been used to galvanize public opinion, raise political awareness, inspire civic and global engagement, and promote social change. Photography’s complex status as art and document, and how the medium has been theorized by critics, scholars, and artists, will also be studied. The ultimate goal of this course is to encourage critical looking, thinking, and writing about photographic images, texts, and institutions. Visits to American photography exhibitions at the C/O Berlin, the Museum für Fotografie, and the Willy Brandt Haus, among other Berlin museums, will be strongly encouraged

The Museum in America: Histories and Controversies (MA Course)

This seminar examines the history, functions, and meanings of museums in society, focusing primarily on the art museum in the United States. Drawing on the ever-growing literature on museology, the course critically addresses the ways in which museums— through their policies, programs, collections, exhibitions, technologies, and architecture—can define regional or national values, shape cultural attitudes, and inform social and political ideologies. The intersection between museum theory and practice will be investigated. Students are encouraged to analyze the ways in which American museums present, display, and interpret the art of the United States as well as that of non-American and non-Western cultures. Using the 20th and 21st century U.S. art collections and exhibitions at institutions such as the Hamburger Bahnhof-Museum fur Gegenwart, the C/O Berlin, as well as the Wallraf–Richartz Museum and the Museum Ludwig in Cologne, the seminar also considers how American culture is portrayed through a European lens. Field trips to the Martin Gropius Bau, the Bode Museum, the Brücke-Museum, among other museums, will be required.

Walking Tour of Berlin Memorials. On June 6, 2019, Professor Katzman led her Public Art MA-Course on a day long walking tour of memorials dedicated to the atrocities of World War II and the Cold War, spanning from Grunewald to Alexanderplatz. Bode Museum, Berlin-Museum Island. On February 6, 2019, Professor Katzman and her Museum Studies MA-Course were given a special tour of the controversial exhibition, "Beyond Compare: Art from Africa in the Bode Museum," by Jonathan Fine, curator of African Art, and Julien Chapuis, director of the Byzantine Museum within the Bode. Fine and Chapuis subsequently led a discussion with the students for over 2 hours, in a museum classroom. Brücke Museum, Berlin-Dahlem. On January 10, 2019, Professor Katzman and her Museum Studies MA-Course were given a behind-the-scenes tour of the museum by its director, Lisa Schmidt. Dr. Schmidt also led a discussion with the students about the challenges of running a small, focused museum far from the city-center, in a major museum metropolis like Berlin. She showed us the floor plans for the forthcoming exhibition on Die Brücke artists and National Socialism.  Martin Gropius-Bau, Berlin-Kreuzberg. On December 12, 2018, Professor Katzman and her Museum Studies MA-Course were given a special tour of the pioneering exhibition, "Gurlitt, Status Report: An Art Dealer in Nazi Germany," by Anna Hellner, a lecturer trained in provenance research. The tour was taylored specifically for the students and was followed by a seminar-type discussion with Hellner in the museum cafe. Wallraf-Richartz-Museum, Cologne. On December 3, 2018, Professor Katzman took her Museum Studies MA-Course on a field trip to the exhibition, "Three Hundred Years of American Art." She was joined by courses from the Universities of Bonn, Mainz, Münster, and London (Courtauld Institute of Art). For this exclusive event, the museum was closed to allow these groups an intimate encounter with iconic works by painters, sculptors, and photographers from different epochs of American art. Professor Katzman led two seminars on social realist art, in the rooms devoted to works from that era. 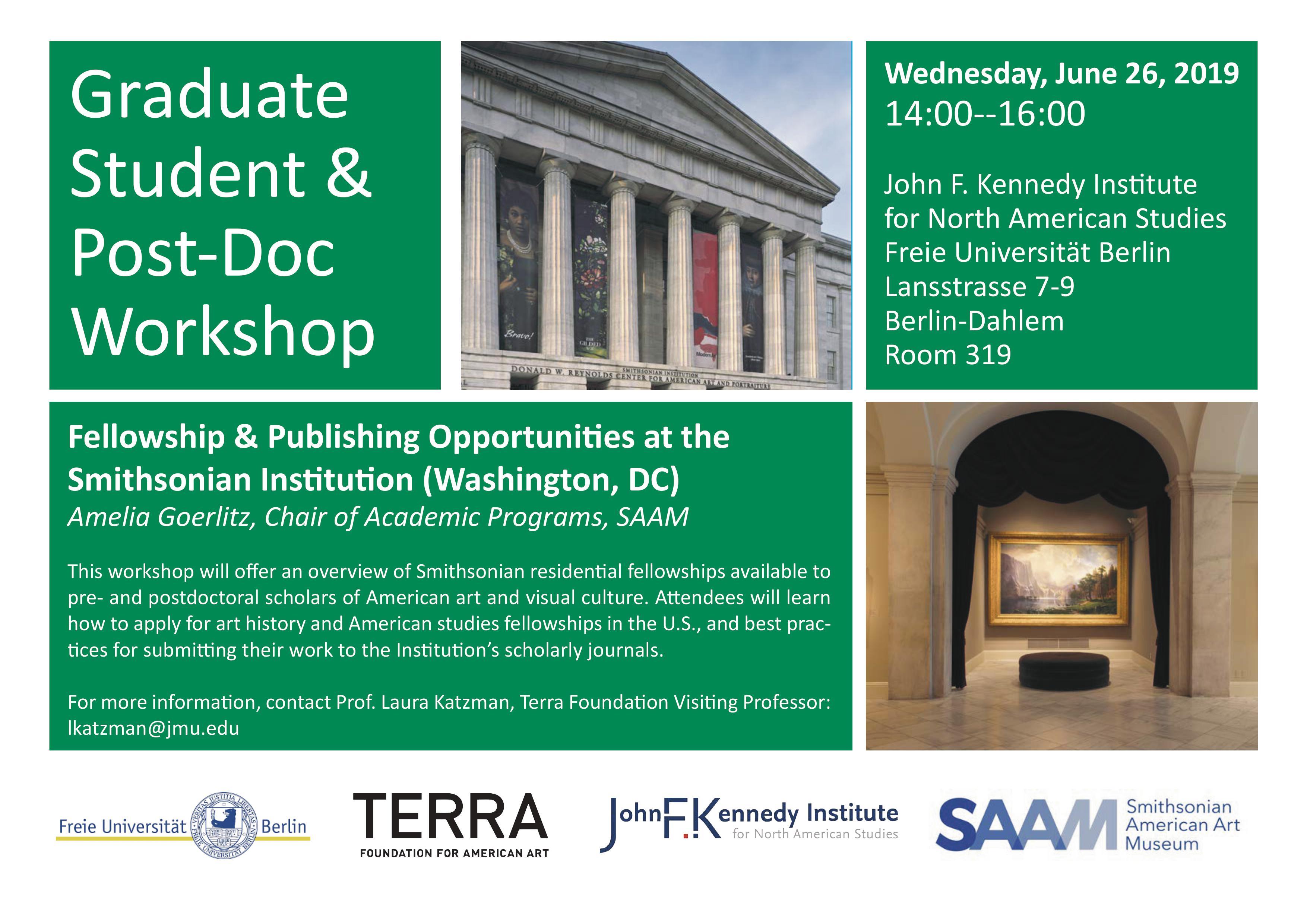 On June 26, 2019, Professor Katzman hosted a graduate student and post-doc workshop on fellowship and publishing opportunities at the Smithsonian Institution (Washington, DC). At this workshop, Amelia Goerlitz, Chair of Academic Programs, SAAM, offered an overview of Smithsonian residential fellowships available to pre- and postdoctoral scholars of American art and visual culture. Attendees learned how to apply for art history and American studies fellowships in the U.S. and best practices for submitting their work to the Institution’s scholarly journals.