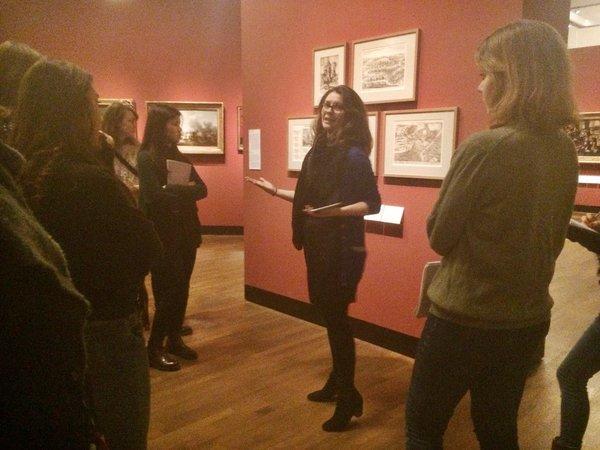 Some impressions of the day, as well as an illustrated overview of Dr. Allison Stagg’s Terra Visiting Professorship at the JFKI can be found here.

Following the success of Lin-Manuel Miranda’s Tony award winning Broadway musical, Hamilton, there has been great enthusiasm and interest for the world of the Founding Fathers during the early Republic. To that end, this course will focus on the culture and art of Alexander Hamilton’s New York between the American Revolution up until the death of his wife, Eliza in the 1850s. Class meetings will consider how history has been remembered today in the musical and will explore the art of the period: the need for an artist market in early New York, the rise of portraiture, the emergence of museums and exhibitions, and the appeal for national monuments in the mid 19th century.

The course will explore the various kinds of visual political propaganda made in America from the Revolution up until the early 20th century by focusing on representations of American power and identity as defined by both American and European artists. Several of the classes will meet at museums and study rooms in Berlin and will involve working directly with 18th, 19th, and early 20th century archival documents and art objects.This course is designed especially for students who seek in-depth knowledge of American Art and may even plan to write their thesis on the subject. Thus, participation is limited to 20 students of North American Studies (FU) and Art History (FU and HU).

Winter Term 2016/17, BA Seminar: "American Art Between the Revolution and the Civil War"

An introduction to art produced in America between the 1770s and the early 1860s. This class will focus thematically on the paintings, sculpture, and graphic art of the period. Several classes will meet at Berlin museums to view art objects made by both American and European artists

George Washington at the guillotine, Thomas Jefferson pictured with his slave, and Andrew Jackson as King. This course will focus on the history of political caricature in Europe and its emergence in America at the beginning of Washington’s presidency as a popular medium of propaganda and attacks. There will be several class visits to the Deutsches Historisches Museum to view prints made after American artists such as Charles Willson Peale and Gilbert Stuart, and to the Kunstbibliothek to view political caricature prints.