Between the 11th and the 13th of November the Political Science Department and the Atlantic Academy hosted the Annual Meeting of the Political Science Section of the German Association for American Studies (DGfA) at the JFKI. Exceeding all expectations, more than 250 professors, PhD-Candidates, Students and people from outside the university participated in the panels, keynote speeches, and discussions on the conference's topic „Balancing the Scales: The United States in an Age of Inequality.“

Trying to make sense of the week's biggest news story, the conference opened with a panel discussing the outcome of the US-American Presidential election. Irwin Collier and Jessica Gienow-Hecht from the JFKI analyzed Trump's surprise election win and - together with Deputy Chief of Mission of the United States Embassy, Kent Lodgson and Prof. Dr. Andreas Falke (Friedrich-Alexander-Universität Erlangen-Nürnberg) - discussed the implications of a future Trump presidency. 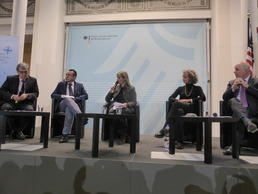 Friday started with a film screening of Curtis Chin's documentary „Tested“ - a movie that looks at the issue of racial diversity and elite public schools by following a dozen families in New York City from different racial, socio-economic and religious backgrounds. The movie as well as the subsequent discussion with director Chin himself allowed for a fluent transition into Friday's topic of „Inequalities at home“: From the impact of the Sharing Economy on Inequality to the implications of Health Care reform and the role of Think Tanks in the public discussion on Inequalities the panels covered a variety of social and political issues currently affecting the United States. Shifting the debate towards „Mortality, Incarceration, and African-American Disenfranchisement,” Professor Michael C. Herron (Dartmouth College) closed the first day with a keynote speech in which he argued that more than 3,9 million African-Americans had been disenfranchised in the 20th century due to, among other factors, disproportionate mortality as well as continuing incarceration. 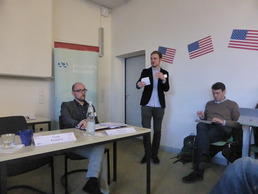 Saturday saw the conference turn its eyes outwards towards global inequalities, incorporating perspectives on Inequality in International Organizations, the politicization of US Trade Policy as well as the relation between financialization, neoliberalism and rising Inequalities. Still puzzled by the outcome of the election, keynote speaker Wendy Brown (UC Berkeley) spontaneously changed her prepared speech on her 2015 book Undoing the Demos and instead gave a talk on the questions of “What made a Trump victory possible?” and “What do we need to rethink in the wake of the election?” Putting forth the argument that mainstream Political Science had failed in the run up to the election, Brown proposed a return to the methodology of the Frankfurt School and their analyses of the “authoritarian character” in order to adequately grasp the implications of a future Trump presidency. The final keynote address thus not only brought the conference full circle from its opening panel but also generated a large and intense debate between all participants – a debate that continued even after the conference had reached its officiall end at 8.00pm. 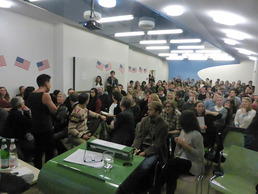 Looking back on the three days, the Political Science Department is immensely happy with how the conference turned out. The engaging debates, the large participation as well as the provocative and inspiring presentations have made us all look forward to the next DgfA conference in 2017.