Two processes have fueled public debate in Germany about the issue of government debt which had already been a hot topic even before: a worldwide explosion in government debt due to the harsh Financial and Economic Crisis since 2008 (which was followed by a debt crisis in some European countries since 2010); and the implementation of a debt brake in the German constitution (Grundgesetz) in the summer of 2009. Not only are the arguments and positions brought forward in the media, by political decision makers and scholars highly controversial, they are often based on dogmas, economic interests, wrong analogies and a lack of knowledge about macroeconomic relations and political processes. In order to clarify these issues and fight the predominant confusion, the German Academy of Sciences Leopoldina followed an initiative by Carl-Ludwig Holtfrerich and provided funding for an interdisciplinary working group researching the subject mentioned above. Twelve renowned German scholars are working on the subject since November 2011. During a Symposium in Berlin (BBAW) at the end of 2012, the expert opinion of top-ranked scholars from the US, Europe and Japan was included. The final report was published in German in May 2015 and in English in August 2016.

Both versions are accessible below.

On November 1, 2011, German Federal Minister for Economic Affairs Philipp Rösler appointed Carl-Ludwig Holtfrerich as part of an independent historical commission. This commission is tasked with researching the history of the Federal Ministry for Economic Affairs and Energy and its predecessor organizations. In contrast to similar projects of other Federal Ministries, this project is not limited to the Nazi regime and the transition to the Federal Republic. Starting with the history of the establishment of the Reich Office of Economic Affairs in 1917 (previously part of the Reich Interior Ministry), the research project covers the period until German reunification in 1990. The results will be published in four books, that is for the period until 1933, from 1933 to 1945, from 1945 to 1990 in the Federal Republic of Germany, as well as parallel structures from 1945 to 1990 in the German Democratic Republic. Holtfrerich will be the managing editor of the first publication (until 1933). He has asked colleagues from the United States, the United Kingdom and Switzerland with extensive research experience in German economic history of the 20th century to contribute to diverse areas of interest and time periods. He will also contribute three articles to the publication. For collecting source material, the authors will pursue research not only in the Federal Archive in Berlin and Koblenz, as well as archives of the federal states. But they will also consult the Special Archive in Moscow as well as the National Archives in London, Paris and Washington, D.C.

The results, published in a set of four books, were presented to Economics Minister and Vice-Chancellor Sigmar Gabriel on December 7, 2016. The results of the conference are accessible on YouTube (see link below, in German only). 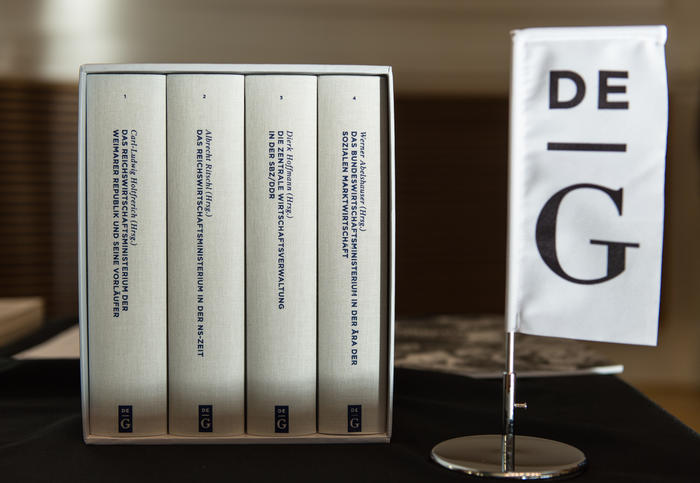