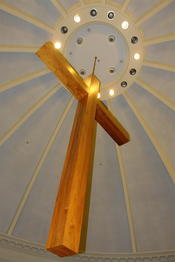 The Christian Broadcasting Network is a non-profit organization founded in 1960 by Pat Robertson in order to produce Christian and family-friendly entertainment and news programming. Only a quarter of CBN’s current programming is explicitly Christian, though; the rest of its programs are traditional family-friendly series, including such classics as “Flipper“, “Bonanza” and “The Waltons“.

On April 7, 2006, our group visited the CBN studios. A short tour showed CBN to be a thoroughly Christian workplace, with crucifixes and depictions of Jesus on prominent display.

Our group also joined the studio audience for a taping of “700 Club” – a popular CBN television show that features a combination of news reporting,  religious sermonizing and communal prayer. The show was founded in 1966  by Pat Robertson – though in its original incarnation, it was a telethon used to raise money for CBN. The show was dubbed “700 Club”, because Robertson was hoping to convince 700 viewers to each donate $10, so that CBN could pay the $7000 rent for its studio space.

Though the show on this day was hosted by Gordon Robertson, the son of the every-day host Pat Robertson, the taping featured all of the show’s standard set-pieces, including the telephoned and written-in requests for prayer which are announced on-the-air. Most of these requests focused on health concerns. Gordon Robertson even made an impromptu prayer for a member of our group, who confessed to having a stomach ache before the show.

We were unable to arrange an interview with Mr. Robertson after the taping, but we did have the opportunity to pose our questions to Ms. Wasserberg, one of the producers of “700 Club“. She gave considered responses to our many queries. Ms. Wasserberg told us that the typical “700 Club“ viewer is not, in fact, a particularly religious person; rather, he/she is a person who is simply seeking a combination of information and entertainment – the “700 Club” viewer also watches other news programming, and the Oprah Winfrey show, for that matter. Ms. Wasserberg also insisted that the show had an interest in promoting a holistic approach to good health.