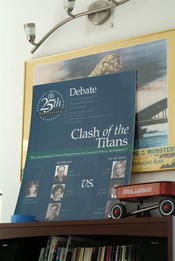 How did you end up trained to work as both a lawyer and a minister?

BL: Well, in the process of studying for the ministry I discovered that a lot of times people who you might assume had purely spiritual problems, often had very practical problems, and in order to help them correct whatever their difficulty was, you had to understand the legal system that they were dealing with. You had to understand what the housing was like, what healthcare was available, that it wasn’t simply enough to say to them, “God will help you, let’s pray together,” because some people had very concrete additional needs and I wanted to be able in a sense be a full-service counsellor.

And I did that for a while and then I became much more intrigued by the possibility of looking at the proper relationship between the church as an institution and government as an institution, and I went to law school while I was here in Washington, went at night, and found that my real passion was for the protection of certain basic constitutional rights guaranteed in our founding document. The most relevant one with the background that I brought, was the preservation of real religious freedom which I liked to describe as the right of religious individuals to practice their own faith with as little interference from government as possible.

It seems to me that it gives you two things: one, a stronger church, because the church becomes vital only as so far as it is able to convince people voluntarily to support it and two, since the government does not have to draw theological lines, it doesn’t have to make decisions based on religious ideas and it can make decisions based strictly on the articulated guarantees, the specific guarantees in the Constitution.

The Religious Right always has argued that your group advocates a total removal of religion from public life. How do you respond to those accusations?

BL: I think what the so-called Religious Right thinks is wrong, is what I believe. They think I want to strip the public square of religion and that is not true. But I want the religion that is in the public square to be not supported by the government but supported by private entities. So that if someone wanted to have a worship service in that park across the street, and they do allow people to meet in that park, I would have no problem with if Jerry Falwell wanted to have a rally, a crusade or some kind of soul saving event over there, because it is open to the public. If, however, the President of the United States wanted to declare this park a holy space and then invite ministers every Sunday to come and preach there, that would be a problem because then they would be transforming or giving official blessing to what is essentially or ought to be private religious practice.

Some of the things that they say I have said are quite amazing. Pat Robertson for example continues to repeat on his television program that I believe that if a church catches on fire, that the fire department should not be allowed to put out the fire, because that would be giving aid to churches by the government. I have never said that.

Do you have an explanation for the fact that forty million Americans believe that the end of the world is coming soon, which is a very unique attitude in the Christian global setting.

BL: Well, I think I disagree with that, because St. Paul, the guy who wrote the first theology of the church, when he was writing letters to the churches in what Christians would call the New Testament, he believed that the world was immanently ending. There was an in-breaking of Christ into the world as he is writing those letters to the Church, so he expected to see the end of history. It is a common view historically that people will point to something as the signs of the end times and then claim it is going to happen. So I think it doesn’t really surprise me that in this generation also we have people who believe this, because they do see poverty disease, a possibility of war, the possibility of the destruction of the world and all life in it. So it is just as real to them as it was to St. Paul, thinking as he was looking at the world, ‘Things are getting tough here, it will be all over soon.’

Do you have an explanation for why pacifism doesn’t seem to play any role in the rhetoric of the Religious Right?

BL: No. In fact, not only is pacifism as a refusal to use force in an organized way against others, not only is it absent, but there tends to be the overwhelming Religious Right justification for almost every war any president wants to participate in. So that after the late Pope John Paul II. said that to go to the war in Iraq would mean that the people in the United States who decided to do so would have to answer directly to God for their misjudgement which is a shocking statement to come from any modern pope.

President Bush brought in a bunch of conservative leaders and theologians and they met with him for an hour and then they came out to talk to the newspapers and the television cameras and said: “We have evaluated whether this is a just war, a justifiable war: we decided it is.” So he took their advice and rejected that of the pope and went to war.

So he does use them. They loved to be able to say, the Jerry Falwell`s and Pat Roberson's loved being able to say: “We have the ear of the President, we are consulted about everything.” So they play off  one and another and they both gain something. The Religious Right gains credibility and the ability to say: “I talked to presidents.” But on the other hand the president gets to use them as a justification for doing things that by any other Christian standards would be morally inappropriate.

Do you think that America is in the midst of a fourth Great Awakening?  Or do you think the current signs of revival will dissipate after George W. Bush is out  of office?

BL: It is a very good question. I think the answer is that we are not seeing some overwhelming renewal of the church. There are certainly higher profile interventions by people in the church into the world of culture, into the political arena, but I don’t think that we are seeing something of lasting significance. For example the drop in church membership from Evangelical conservative churches when their own children go off to college is dramatic -- I mean it is just as dramatic as the drop of that one would find in a so called religious moderate or mainstream Protestantism.

Why is the religious right so prominent on the political landscape of the United States, if they are a relatively small portion of the population?

They have power because they are better organized than other religious groups or even then any secular group. The Religious Right can turn out voters and they did in this last presidential election. They have institutions that do this. When you get people to a church on Saturday or Sunday as well as on Wednesdays, and they have a place to talk to them about the issues and some times even though in the country it is illegal; you can tell people who to vote for, you see these people twice a week hammer home “vote for Bush, vote for Bush”, that is pretty persuasive. Then people say: “ I better get up in the morning and stand in line and vote, because the minister said I better do it.” And that message is pretty powerful, because the minister is essentially saying: “God told me and I am telling you vote for this guy for president.” And that is a powerful motivator. But in the last few election cycles the number of people who characterize themselves as members from the Religious Right, or the other phrase is Evangelical conservatives, stays about the same, fifteen, sixteen percent of the electors. That is a big clump of people, but it is not growing, it is staying pretty much the same since the days of Ronald Reagan's presidency.

Faith-based initiatives, like Mark Earley’s Prison Ministries, argue that they’re more effective in solving persistent social problems than their secular counterparts and that they have nothing against a liberal, pluralistic approach: how would you counter that claim?

BL: I think of two levels. First of all I don’t think that government is ever in the business of converting people. So fundamentally I disagree with that idea. Practically I disagree with it also. I don’t know how much you felt this, but this country is very anti Muslim and anti-Islamic. It is not all bitter and out in the open, but you couldn’t get money from the Congress for a Muslim prisoners program, no matter what lobbyist you hired. It would simply be viewed as giving money to them. The Islamic religion? We just don’t approve of it. So on a practical matter, these other groups Mark Earley says he would like to come in – that’s only if they are not fundamentally wrong: Jesus is the only way. I am sure he would have said that if you would have asked him.

But then as a practical matter these other groups are not got to be able to get that kind of government funding, even if we dolled out money to any religion that came asking for it which I think would be a bad idea, but even if when one thought it was a good idea, practically people like Mark Earley would get a vast amount of money. It’s kind of a fluid idea because Congress has never really approved of it, but all the grants that come from the President’s discretionary funds to religious groups, virtually every one goes to a Christian group, I mean you are lucky to find one in a thousand that goes to a minority religious group, because they, the Christians, have the power.