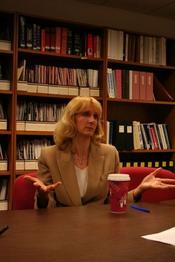 What are the major goals of CWA?

WW: We have six core issues that we work on. Sanctity of life, which is somehow broad – that includes abortion, cloning, embryo research, euthanasia. We have defense for the family, education, national sobriety, religious freedom – I think that’s it. Oh sorry, pornography, that was the sixth.

Do you think your political lobbying interferes with the separation of church and state?

WW: We are not trying to establish dominance of any one religion. What we’re trying to do is bring arguments to bear on policy issues – arguments that are founded in biblical principles. Just like special interest groups that represent environmental groups, trade unions – they do the same thing. They have certain principles that they are trying to implement into public policy, or into laws, or into court cases or in the rest. We’re just doing the same thing. So what we argue is that we shouldn’t be treated any differently. We shouldn’t be prohibited from doing what everyone else is doing simply because we’re Christian. We should have the same rights as everyone else to influence public policy.

And what if that interferes with other people’s religious freedom?

WW: Well it doesn’t, because if you look at the things that we have advocated, we advocate across the board for religious freedom, not for preference of our particular religious beliefs. And that’s a great distinction. We recognize that if we want to protect it for ourselves, we have to protect it for everyone.

Does your organization advocate the subordination of women to men?

WW: We believe that men and women are distinct and that God made us different and we should respect those differences. But it’s not that one is better than the other. And that’s the reason why so many women have been attracted to our organisation, because they are fed up with the other women’s organisations that have advocated that women should be given preferences, that women are stronger than men, women are better than men. We feel that men and women are equal as far as that God created each one of us in His image, but we are distinct and we should honour those distinctions.

How would you characterize those differences?

WW: Well, you can look at the family and what you find generally is that women are nurturers and men are providers and protectors. That is not to say that women can’t be on the work force. And what we’re finding in the last couple of decades when there’s been such freedom for women to do what they want, women are now choosing to go on for higher education, but then stay home with their kids. That’s a choice they are making on their own and I think that this is a reflection of their instincts, I guess you could say, as a woman.

How do children benefit from being raised in traditional Christian families?

WW: There’s a lot social science data that shows that children benefit by having a mother and a father in the home. The children learn something through the modelling of a father that a mother can’t replicate and vice versa. A mother is not able to replicate what a father provides; provides in a sense of just in their being as a man, as a woman.

Do you also promote homeschooling?

WW: We do. Well, we think that parents should decide for themselves what form of schooling, whether it be public school, private school, charter school or homeschooling. But a number of our members do homeschool and I think the benefits of homeschooling have proven themselves out. Homeschooling parents are able to recognize, because of spending so much time with their children and working with them very closely, the strenghths of each one of their children, that each child is different. And they can help to develop the gifts and the talents that each individual child has.

And what does feminism mean to CWA? Do you consider yourselves Christian feminists?

What sorts of AIDS-prevention policies does CWA advocate?

WW: Well as you know there are different ways of contracting HIV. With sexual activity the evidence has shown that the programs that are the most effective are the ones that promote abstinence. And let’s look in country examples. South Africa from the beginning of the HIV/AIDS-crisis has completely focused its resources and it’s policies on condoms; and it has also had the highest rate of HIV/AIDS, not even close to coming down, not even stabilized, it continues to go up. Contrast that with Uganda. President Museveni and the first lady recognized the serious problem in Uganda and promoted abstinence outside marriage, fidelity within marriage. And Uganda is the only country in Africa to have seen a decreased number of cases of HIV/AIDS. There’s something that we call AIDS Inc. and what we mean by that is theses are advocacy organisations, companies and the rest that profit of promoting condoms. They profit of the AIDS-crisis. And they have consistently advocated policies that have proven to not reduce HIV/AIDS. So, yes, we’re an advocate for what works.

Do you think that abstinence-only policies are related to high teenage pregnancy rates in the USA?

WW: When you look at the problem in the United States, you have to look at the overall picture – and the overall picture is that the promotion of sexual activity in our culture is to the extreme everywhere you turn. And that’s why the abstinence programs are so needed because essentially what they’re saying is: you don’t have to be sexually active and in a sense we are giving them a choice because without that they almost feel they have no choice. There was a survey done by Emory University a couple of years ago in which they asked young people: what would you like to be taught in a program, what would you like to hear? And over 70% of them said: How to say no. So that is a message that many young people want and sadly there are some people that don’t want to give it to them.