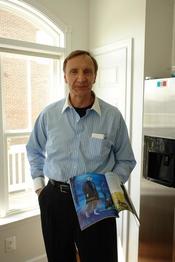 RC:  Oh, by no means! Although a lot of evangelicals disproportionately have been voting for Republican candidates, historically evangelicals were Democrats. And as a former Democrat I can say that: We think that’s its because the Democrats walked away from us and not us who walked away from them. The Democrats never quite figured out how to relate faith to politics. So it’s because Republicans courted the evangelicals that they in fact would vote disproportionately for them. But its not because we think that the Republicans have a corner on truth. But they have done a lot better job with the values issues.

RC: No, it’s not. You probably have political conservatives divided in maybe a half dozen ways and religious conservatives are maybe just one small slice of that bigger pie of political conservatives. But, if you look at the GOP coalition, evangelicals do constitute about 40 to 50 % of that big umbrella of the conservative coalition. So the Evangelicals have gravitated to the Republican Party and they have a certain amount of influence, but they can’t do it on their own.  Evangelicals have a real capacity not necessarily to determine the outcome of elections but rather to help shape the debates, frame the issues.

Is there conflict among conservatives on how to deal with HIV-prevention in the US and Africa?

RC: I don’t think there are any oppositions here, except maybe concerning the distribution of condoms as way to prevent people from getting infected. I am not among those who oppose the distribution of condoms, which is a different position than the president’s emergency plan, the ABC Plan. There are some who oppose giving out condoms even to high-risk groups. I think that’s counterproductive.

You’ve been quoted as saying that faith is a public matter, not merely a private one. Can you elaborate on what you mean by that?

RC: In a big picture context, I say we have a mandate in the Lord’s Prayer for the earthing of heaven, in the sense that the Lord’s Prayer is the great petition that says: thy kingdom come on earth as it is in heaven. So the earthing of heaven is really about the task of living biblically or Christianly on earth, in ways that are consonant with the kingdom of God. So the mandate is to live uprightly as much as you can on the earth, and part of that is to simply be a steward of the earth and also a citizen on earth. And part of being a citizen on earth is as Apostle Paul says, giving to Cesar what is Cesars. And what does Cesar call of us to do? To rightfully engage in a public order. In Pauls day there wasn’t many democracy so you couldn’t go out and vote, so Pauls says: give Cesars what is Cesars. Well, who is Cesar? In this country we all are Cesar! The Capitol building, that’s the people’s house. So it’s our mandate to serve God on earth.

Recently, the NAE has prominently taken up the cause of climate change: has there been resistance among religious conservatives on this issue?

RC: There is a fair amount of resistance. Twnety-two leaders wrote us a letter saying, “Your governmental affairs guy in Washington, Cizik, should not be talking as if all evangelicals believed that climate change was real.” And then they said that it shouldn’t be on the NAE Agenda. Some of them are the leaders of major groups. So there is a certain amount of pushback, I think.

Recently, President Bush has emphasized alternative energy as a national security issue: what do you think of this strategy?

RC: Well, the real motivation should not be the fear of an attack but ought to be upon what our biblical values of sustainability, recovering our true responsibility as stewards of the earth which God has given us and which he will hold us responsible for. And so I say, quoting Revelation 11:18: “He will destroy those who destroy the earth.” I think that the people who are responsible for the last five years of dilatory action on climate change will be held accountable by God. And George Bush will be held accountable. How can a high official in the government of the most powerful nation in the history if the universe say:  “This is all a hoax!” It’s totally beyond me.

What is your vision for the future role of evangelical religion in American society?

RC: I believe that we offer not just basic principles that should guide our society, but we have to actively care about everything from human rights to the earth we were put on here. We have to care for people as well as plants and all living things. And this Christian ethic is nothing new. It has been described by the greatest theologians. There is this story that Martin Luther was asked: Why are you planting that tree? If Jesus came back tomorrow would you still plant that tree? And Martin Luther says Yes, I would still plant this tree. In other words this is nothing new. But in recovering it, in recovering the true evangel of what it means to be a citizen of this earth, to recover that in its truest sense is I think truly blessed. And to receive that greatest blessing of all, that is the ethics that should drive us. Not in this of all political towns, who can I be to an oblivion and have my will done. So there is a great Christian ethic. It does not begin with us, it begins with the scriptures, it ends with Gods call at the end of live. But if you live it, in between, what greater calling is that? And so the methodology even is important. How you do it is as important as what your goals are. And the methodology for the Christian or public order is not a winner takes all, zero-sum game. Not just take what I can get, which is what some people in this town operate their businesses like. And some of those people call themselves Christias. Sad to say. But doing what’s in the best interest of all people!; And serving justice in a biblical sense: That’s a wonderful calling and that’s Christianity.