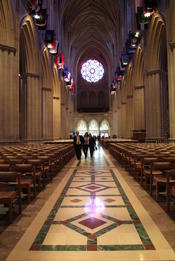 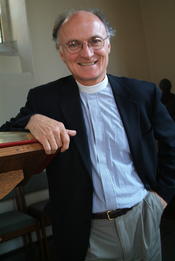 Could you describe the charter of the National Cathedral?

HA: We were chartered by Congress. We’re an Episcopal cathedral and we were chartered to be a house of prayer for all people. A church of great national purpose. So when Ronald Reagan dies, we do his funeral. President Ford happens to be an Episcopalian, and his service is already planned. Billy Graham’s service is already planned, the American evangelist.

How prominent is the National Cathedral in the American consciousness?

HA: Now, I don’t know if you’ve noticed, but you can see this place from everywhere. From the national airport, from downtown, this place dominates the skyline of the city. So that was the idea, to remind people that there was a higher power than government. If something gets said on this pulpit it’s noticed. Especially something that’s firm and clear. So one of our goals, especially with our new dean, is to be a voice very different from what you’ll hear in Lynchburg or at the 700 Club. That’s the voice that’s dominated certainly the European perspective of what goes on in American religious life. And frankly the religious right is better organized than the mainstream.

In your assessment, how did the religious right achieve such dominance in recent years?

HA: My feeling is, is that economically conservative interests have manipulated the religious right. If they really think for a moment that the big corporate leadership really gives a damn about their issues, they’re wrong. Most of those folks live in gated communities outside of New York City or Los Angeles, and they really don’t care. And a lot of them are Episcopalian. And they might be pro-choice. But, they don’t care because it serves their interests to have the Republican Party in power.

Does the National Cathedral cooperate with faiths other than Christianity?

HA: Sure. For years we’ve had what we call an Abrahamic Dialogue, which is a dialogue between Judaism, Christianity and Islam.  And we meet quarterly. It’s four Islamic leaders, four Jewish leaders and four Christian leaders. We also have what we call Abrahamic scholars. The last scholar was a wonderful, Somali, Muslim woman and a Jewish woman who teaches at a Jewish seminary in Philadelphia and a professor from the Virginia seminary. We have one whole center of the college called Center for Inter-faith Initiatives. In fact the governing board of our college has Muslims and Jews on it. Our national advisory board has Muslims and Jews. In fact, it’s a much better relationship between us, as Episcopalians, and the Muslim and Jewish communities than it is with Christian fundamentalists. Because we’re beneath consideration in their minds.

Do you hope, nonetheless, to work with groups from the religious right?

HA: One of the strongest things we could do would be if we could create alliances on issues with the conservatives that we agree on. Like poverty should be addressed. Whether an orphan should be cared for. And that’s our attempt at -- we know we’ll never be doctrinally unified on how to read scripture. They believe it’s literal, we believe it’s not. But we agree and put that massive coalition together on global poverty. Everybody in religious life, whether it’s Christians, Jews or Muslims, Hindu, Buddhist, everyone believes they need to care for the poor.

Are you also a proponent of Bush’s faith-based initiatives?

HA: We got ten million dollars. But, I’m wary of the program, because reports have shown that most of the money has gone to Bush allies. And that’s always been the worry about church and state issues, not that churches aren’t able to carry out, and cheaply and without graft, all kinds of social programs, but who gets the benefits? And if the Democrats are doing it, they’d probably be favoring their allies. But, I think the kinds of broad-based coalition like we have mitigates against the worst of that. Because we have very conservative Christians, and very liberal Christians all working on one side. The issue is not my religion – you know one of the pillars of Islam is giving alms, giving to the poor, one of the things Jesus talks about is giving to the poor, and in the Jewish tradition, the prophetic tradition, it’s all about how you’re treating the poor, what you say is neither here nor there, if you’re not taking care of the poor, you’re done. All these religions agree on that, and so we can agree to help the poor. And if government is going to support that, you’re going to have a whole spectrum of faiths and you’re not going to have just your friends, because it’s a coalition.

If such an event takes place with the President in attendance, who has the last say on the organizational matters? Is he in charge or are you in charge?

HA: We’re in charge. Really since 9/11, the secret service has tried to take charge. So it’s mostly about security issues, who can come and who can’t. For instance, for the inaugural prayer service, the president and the secret service are insisting that everyone get background checked. And we said, “What about the public? We’re a house of prayer for all people.” And they said, “Oh no, we ain’t gonna have no public in here.” Well, we came very close to saying, “Why don’t you hold it somewhere else?” There’s always a rub between our liturgy folks and them as well. They want to sing patriotic hymns, fly the American flag everywhere, and that’s just natural, they’re politicians and we’re church. And when church and politics come together there’s some rub and bump. We always work  it out. We love to host these things. And here’s what we do. The inaugural prayer service is the president and the whole cabinet. Two days later it’s the youth non-violence and Martin Luther King Day and we have the Boots Project. A ring around the cathedral with boots and pictures of all the troops killed in Iraq, and a massive pile of sandals to remind us of the civilian Iraqi deaths. And very critical speeches. Very hard-hitting prophetic sermons about war and peace issues. And where we thought Jesus stood and where the Islamic scholar spoke about where the Prophet stood, and where the Jewish tradition stands. In one week.

Do you always host people from across the political spectrum?

HA: Yes, we insist on having free speech.  While we do control the liturgical practice, we do tend to have a wide range of political opinion. I’m a Democrat. The people that presented me from Board are two former members and one current member of the Republican National Committee. It’s a whole sweep. It’s excellence we’re looking for, not an ideological position.

HA: I think it’s part of that war on modernity. They don’t like what’s happened to this society. It’s very disorienting to a lot of people. Rampant commercialism. Turn on the TV and you can see naked people and they swear. And they’re clinging in the same way Radical Islamists are clinging to what their mullahs are telling them. I mean, if you have a sore tooth you go to a dentist. If you have a theological question, you don’t go to a dentist, you go to your pastor. And if he’s a fundamentalist then he’s going to say that your daughter got pregnant, your sister got cancer, because you sinned, or she sinned. That’s what they teach. And so we get a lot of people in the Episcopal Church saying that doesn’t track when I read scripture.

So mainline protestants prefer to reach their own conclusions?

HA: Well, in this era of rapid change, there’s a lot of people who want to be told what to do. It’s simpler. But, if you try to tell your Episcopalians how to vote, it just won’t work. There’s certain ways of taking-in information. Episcopalians tend to track freethinking, independent-minded libertarian types  and they don’t want to be told what to think. And someone got mad at me in my last prayer, said “Why don’t you ever tell me what to do?” Great. That would be Howard’s opinion but nobody else’s. But, mostly I think that it’s a thinking person’s church. Most of the mainline churches are, where we realize that we try and give you the tools and try and connect you the tradition and have you deeply delve in the scripture and then you make those decisions privately, especially ethical moral decisions. I don’t think you’d find anyone in the Episcopalian Church that thinks abortion is a good deal. But you’d find many people who think that it’s not always the worst deal.

How can Fundamentalist theology manage to ignore scientific research and still be popular?

HA: They’re creating a deep divide in society. If you look at bio-ethical issues, stem cells. Bush once talked about stem cells as babies. And now global warming. There’s fundamentalist Christians that say, that’s just a liberal plot. And so, already -- the creationism, and intelligent design are saying that evolutionary science is just bunk. God created the world 4727 years ago. But, if you read the Gospel of John, the Prologue, it sums up the big bang. It’s just right there. If you don’t take it literally. You take it metaphorically, there it is. There’s the evolutionary process. Things exploding outwards, gasses forming and then you go back to Genesis and God is bringing light to the darkness. Did God, did a first cause start this? I believe that it did. Did God 4727 years ago make Adam and Eve and … no. We know that that’s not true.