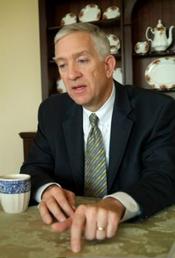 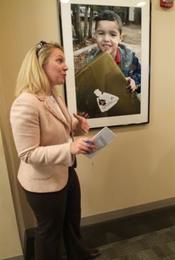 How did you become involved with Prison Fellowship?

ME: Prior to my involvement with PF, I practised law for 15 years; after I lost an election for governor, I received a call fro Chuck Colson to join PF. I had great respect for Chuck Colson and his work but at age 48 I was hesitating to engage in something entirely new. I asked myself: “Why is it worth investing my life in prisoners?” I struggled with the idea because, like many people, I saw prisoners as people with no hope, who had made a mess of their life and often failed to accept responsibility for their actions and wrongdoings. So I was praying about the decision and turned to the scripture for guidance. There I read about Moses, who in his younger life was a murderer. I also read about Paul, an important figure for church building, and yet, Paul was a religious terrorist for the early church. I would compare him to what Osama bin Laden today is for the earth. So I came to the conclusion that God has a very different view on people that differed from my view at this time. I learned that God chooses his people, also among sinners and has special plans for them.

Do you think PF is fixing a social problem?

ME: I am definitely labouring in an area with significant need for change. The driving philosophy today in the criminal justice system is to get people off the street, to lock them up and thereby protect the public. There is nothing wrong with locking up people who are a danger but what is missing is a realisation that most of these people come back out. So, the general question is do they come out changed, or the same, or worse? With people who go through the programs of PF, the recidivism rate is reduced significantly. Our goal is to see the power of Christ transform the character of the inmates. There are studies about prisoners that have pointed to a lack of moral training in former years. According to this people are in jail because of making wrong moral choices. But simply locking them up doesn’t change their character and can make them even more anti-social, especially because of prison conditions. So the approach of PF is to help them to embrace a new set of values, which is a Christ centred set of values. In the end that is going to enable them to transform their life in significant ways.

Obviously the core value of your approach is based on a personal relationship with God. This was also very common emphasis in the social programs of the 19th century. Do you look back to those earlier efforts?

ME: The early prisons were called reformatories. In my view the church had a role early on in social reform because it recognised that people had a chance to be redeemed by God and by interaction with their fellow men. I think that the church in America for many years withdrew significantly from involvement in social issues. But in the last 25-30 years, we can see a re-awakening in America, in the form of a lively church that reaches out into the world again. So, yes, what we do at PF is nothing new, but a form of re-enacting.

Even though there are so many Christians in America, an emphasis on punishment is very prevalent in society. Isn’t this in contrast to some core principles of the Christian faith?

ME: Well, I am certainly in favour of Christianity as a life system that applies to every area of society. This is a concept that the church in America has not embraced for a long time. Christians should be in education and in the criminal justice system and actively shaping the way things are done. They need to shape the foundations of how we think about these issues.

Can you tell us more about that, for example about restorative justice?

ME: Restorative justice asks the question about the relation of biblical principles compared to the actual system. The aim is to try to change our system to be more in line with what God tells us reality should be like. In scripture we can find the notion that someone who committed a crime not only broke the law, but also the peace of society. Therefore the community is harmed every time a crime occurs. There is the importance of punishing the law breaker, but this is just one part of the process. There is also a need to repair the brokenness of the community. In my view, the American system puts to much emphasis on punishment and to less on restoring the victim and the peace of community.

What do you think about “three strikes and you’re out,”  a program established under the Clinton administration. Is this going into the same direction?

ME: The idea behind “three strikes and you’re out” is that a lot of crimes are done by “repeat fellows” with a long felony record. In principle I agree with the idea but you have to maker it a little more specific because there is a great range of felonies. I think that you get weird results by equalling crimes. This concept needs to be modified and adjusted before it really works.

Can you talk about the distinction between faith-based prison and strictly state-run prisons?

ME: I want to put emphasis on the fact that there are no faith-based only prisons. All prisons are run by the state. What you have is that often there is a wing or a building for a faith based program. I see church involvement in prisons as nothing new. Prisons in America always had religious programs. There were chaplains in prisons almost from day one. What I see as the major area of difference is that faith based programs are centred around a holistic faith-based approach to change. There are no other programs with such a strong focus on rehabilitation. Here the focus is on life skills training and a Christ centred way of living. In my view, PF is clearly filling a gap. We hope not only to change lives but to send a message to the broader criminal justice system that there is a different way to do things.

What do you answer those critical voices that accuse your organisation of having achieved a dominant position in prisons and therefore threatening the separation of church and state?

ME: I must insist on the fact that PF was probably one of first groups to offer such comprehensive programs. I defend our programs as significant programs that work and produce good results. I have worked in the system all my life and there is no way that government workers can rehabilitate people in prison. This is not a normal job. It requires a personal relationship and a motivation by a higher principle. I am advocating for a Christian approach that I think is the best way and produces the most significant change. From a state’s perspective I would open the door to anybody who can show that he can produce results, and judge everybody by their programs and results.