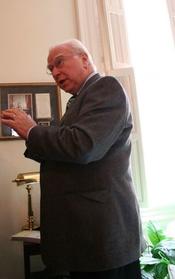 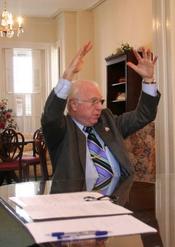 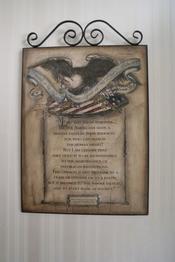 What are the typical issues your organisation deals with?

LS: There are five issues that we deal with. The first issue that we started out with and which is still a very important issue is called “religious liberties”: keeping the state off the back of the church. The second issue is the right to life. That’s all of abortion, stem cell, partial- birth- abortion issue. Third issue is pornography and obscenity, which has to do with the terrible rise of predators and “human trafficking” – that means kidnapping little girls and making them prostitutes and the homosexuals kidnap little boys to make them male prostitutes. Um…so, we…um…religious liberties…um…the right to life, pornography and obscenity…um…and then we have…um…the issue of…um…the gay agenda, the homosexual agenda. And then the fifth one is the rights of parents to direct the destiny of their children. For instance, we just had a court case against us. It was the 9th Circuit Federal District Court in San Francisco which is extremely liberal: they said when you bring your children to the school house you lose all say in what gets taught. So, first example I brought up was, suppose you have another Adolf Hitler in the school house. You gonna allow that to be taught?

How, exactly, do you explain the loss of the traditional values in the United States?

LS: Hollywood…and the media…you see…when we do polling, we win. People want their girls not to be pregnant before they are married. Parents do not want their kids having babies before they have husbands. That is common sense. I mean, what girl wants to not have  a husband if she has a baby? So, you have to put that into perspective. They act as if…you know… having sex is just like having a cup of coffee at Starbuck’s. It’s just…you know…nothing. Hollywood glamorises the sexual relationship and they forget the marriage bond.

In general, how would you judge the influence of conservative religious groups in America? Is their influence increasing or decreasing?

LS: It is always increasing. Even though there is big turnover, we haven’t even begun to tap into the number of people in America who feel real bad about not being able to say “under God” in the Pledge of Allegiance or that the courts said to the parents: you lose control of your children when they come into the school house. There is almost 300 million people in America now and a very conservative estimate would be maybe between 50 and 60 percent are very conservative. The press calls us the “Religious Right”. Well, if there is a “Religious Right” there has to be a “Religious Middle”; there has to be a “Religious Left”. And those are people that are waiting to be reached out to.

Why do you think conservative Christian organizations like yours have difficulty partnering Islamic groups in America?

LS: I think partially because they have not really decided as a group that they are Americans. See, there is a different kind of gear you run here…you know, when you drive a car you get all those gears in a little Volkswagen? If you are still in first gear, you can’t go as fast as when you get in the high gear. When you become a citizen you get in the high gear…and it’s a different…just a whole different attitude.

And how are relations between conservative Christians and the Hispanic community?

LS: I think the Hispanics have assimilated very well…and I think that’s why we have lot of illegals are here because they need money. Well, that’s honourable. They wanna work, right? But you got to do it right because many Hispanics came the hard way. They got the visa. Then they got the Green Card. Then they applied for citizenship and then after 7, 8, 9 years it was settled. But if you just come across the border and you wanna earn a lot of money and then expect people to hire you as an illegal: It just creates more problems. Can you imagine a hundred of thousand Americans waving their American flag in Bonn, Germany, demanding this or that or the other? I mean that wouldn’t go over at all.

Why is the fight against homosexuality one of your main issues?

LS: Well, homosexuality directly becomes an adversary of the most basic Christian doctrine which is the creation of men by God and the creation of woman by God to be together with man. And it absolutely comes into terrible conflict with Genesis Chapter One and Two where God says and that he blessed them -- male and female -- and commanded that they would multiply. That’s marriage and this comes right into conflict…see, the homosexuals don’t want gay marriage. What they want to do is tear down marriage…and then rebuild a whole new consensus. It’s called sexual diversity. Andrew Sullivan, a very well known homosexual, says: look, don’t you try to limit me to one sexual partner; we like variety. That’s an actual quote. So, this issue is so basic to the Christian doctrine. And it’s important because we have to face the fact that it’s dysfunctional.

And how do you deal with criticism that you get from other groups?

LS: We don’t let it bother us. We answer it if we think we should, but, you know, it’s like water running down a duck’s back. My mama who was Jewish, used to say to me: sticks and stones may break your bone but names should never hurt you.