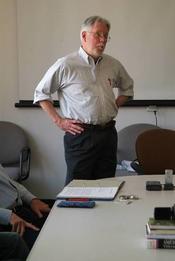 Could you tell us about your experiences with the Christian Right?

AC: Well, first of all I can tell you that I don’t usually use that term. I think of them as social conservatives, or religious conservatives or Christian conservatives in the United States. On a personal level many of them are very wonderful people and I have good relationships with them. My experiences are positive in that sense. I don’t think that they are a furious bunch. Largely what you are dealing with today is an evangelical movement that is profoundly part and parcel of American culture. It’s not a separatist movement. It is about integrating Christian values into American society and into American politics. It is people who feel to a large extent comfortable, and feel that they are part of American society. On the other hand, American evangelicals have a kind of a besieged mentality. They do think that their views are under attack by the culture as a whole. And they do think that most Americans look down on them. So the irony here is, you have a group that is in the ascendant politically. But it still feels attacked, it still feels besieged, it still feels spat upon.

Do they have a case? Is there, in fact, a war on Christianity?

AC: Well, I mean, again I can’t answer that as a factual matter of “yes” or “no”. But I can say that it’s important to understand the perspective of those who feel that their view is beleaguered by the general culture. I think that in fact a lot of Americans feel that way.  I think a lot of American parents feel  it is very difficult to raise children, because the children are besieged with violence and sexuality, and images and messages that are contrary to what the parents – whether they are evangelical Christians or not – want to convey. I think that Americans by and large feel consumerism is way out of hand, materialism is way out of hand and that different spiritual values need to be raised up. In that sense evangelicals are really not different from where the vast majority of Americans are. The difference is that evangelicals think the answer to this is actually found in the Bible, the answer is actually found in Christianity.

How do members of those organizations approach you as a journalist?

AC: I would say they are still weary of the mainstream press. And they think of a place like the “Washington Post” as a liberal, secular institution that is probably hostile to their values. So I find that actually if I am respectful to them and listen carefully, that actually it works very much in my favor, because it is not the reception they expected to receive. And then they open up.

How high would you overall estimate the overall influence of conservative lobbying or interest groups on political decisions that are made in Washington?

AC: Of cause there is a lot of influence. The influence may not though come from lobbying. One of the things to realize is that there are now many people in the Republican Party, in Congress, in the White House, in the executive administration who share these views. So it isn’t necessarily lobbying, it isn’t necessarily outside pressure or so. They are very much in sync with people outside who hold a Christian world view,

Would you say that there is currently a religious revival in the United States?

AC: I don’t think so. There isn’t good demographic data to show for that. On the other hand there is greater interest in religion. You have more people going to … rising numbers of students taking religion courses in college, rising numbers of people going in divinity schools. And anecdotally – I am not sure I can qualify this – but it certainly seems that books about religion are hot sellers or “hotter sellers”, there is more on TV and more in “Zeitgeist” about religion. There is more interest in religion, but not necessarily any more religiosity.

You mentioned that there’s a hesitation on the part of journalists and editor to deal with religious issues: why do you think that’s the case?

AC: I don’t think so much that editors are afraid. In fact, I am sure that they are not afraid torival leaders of conservative Christian groups. What they don’t want to do is have ordinary readers pick up a newspaper and look up a story and find it to be disrespectful, to cross some kind of line that the editor didn’t realize was a line.

As a journalist, do you think that conservative Christians get too much press, or do you ever think that journalists aren’t critical enough?

AC: You know what I think? That’s a real problem. I think the extremes get too much press. I think it’s almost by definition: news is what is unexpected, it’s not when things are going well and in ordinary fashion. So when priests and rabbis and ministers take good care of children it’s not a story. When they rape and abuse children it is a story. But most priests and rabbis and ministers are not raping and abusing children. It’s a constantacross all aspects of the news business. And I hear it a lot. Ordinary folks who go to church, who go to synagoge, who go to mosques, and who feel that their religious group does mainly good things and that their religious leaders are good hearted people. And all they read about is when somebody stands up and says something outrageous.