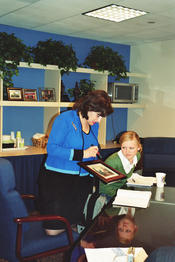 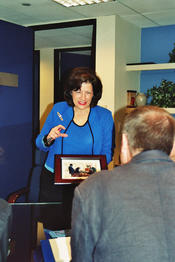 We Care America is a very young organization. Are you satisfied with the development? What did you achieve so far? What is the organization’s agenda for the next years?

WCA: Yes and no. We did some good work so far, but there is still so much to do. We also always have to raise money to finance our work. But we are satisfied about the progress we have made. The Faith-based initiative might go international. There have been many requests by other countries like Mexico, Australia, Italy and the UK to know about our work. Israel has contacted us. We even talked to China, which was very fascinating as there is no freedom of religion over there. Even the Netherlands, a completely secular country, is interested in our ideas. Why? They want to know about how we changed the role of church in the country, they feel they have to do something because the number of people in need in their countries is rising.

Where does WCA get their funding from?

WCA: We Care America is a private non-governmental organization. It finances itself by government grants and private donations. Mostly we receive governments grants to pass them on to faith-based groups and keep only part of it to fund our work.

Was the founding of We Care America a direct response to President Bush’s Faith-based Initiative?

Critics claim thatthe Faith-Based and Community Initiative violates the separation of church and state. What would you answer those charges?

WCA: So often in our country you hear about separation of state and church. That was not the intention of our country’s founders. In fact, our founding fathers, despite what people say about Thomas Jefferson, wanted everybody to have a seat at the table. He knew that a community is made up of families and governments and community groups and church groups. So you can’t just separate state and church.

How do you think will the access to public funds for faith-based organizations change when President Bush is no longer in office?

WCA: We actually have no idea. We think it would be hard to undo it. But we really don’t know. That is a reason why we are thinking to focus more on the grass roots level than on the federal one. In our experience the networking on the grassroot level works much better, there are just less conflict when you know people personally. It’s not only about the money and receiving money from the governemnt. It is also about networking and beeing heard.

The WCA National Grant Center helps these groups to compete for funds against other private and public organizations. What is the strength of a faith-based or a community-based organisation as compared to a secular organisation?

WCA: Government can’t give you a hug. Faith-based groups do more than just feed you. In the case of drug addicts, they don’t just keep you calm and non- violent; they try to change your life. In the case of prison ministries, they achieve huge results in rehabilitation. What do we have to fear more?: a drug addict who is violent or a non-violent, ex-drug addict who has converted to Christ?  There is also this saying about “soup, soap and salvation”. Government can give you soup and soap, but not salvation. And we do not want them to do that. We can do that ourselves. This is what freedom of religion is all about.

You provide your services to a lot of faith-based organisations. What are your criteria concerning faith to choose your partners?

WCA:  We are a christian organization. We work with christian groups especially with protestant evangelical groups. Some of our coalition partners in certain projects might be of Jewish faith or Muslims, but that would be an exception.

Some religious leaders claim that receiving government funds might lead to dependence and compromise. What do you think about that?

WCA: That is true.There is a huge number of faith-based groups who prefer to work without governmental funding. Many of them fear the restrictions made by the government. could limit their practise of faith.The regulations are very strong, lots of paoerwork has  to be done - that’s why many organizations don’t even want to have government money. We help them in this way, making it easier for them to get access to grants, which would other be very difficult, especially for very small faith-based groups.

The president of WCA, David Donaldson said, “if we do not compete for these funds, then groups that do not share our values will receive the money”. What values, precisely, do these groups represent that are contrary to yours?

WCA: We want Christian groups to have a seat at the table, to give them access to the lawmakers, to bring their opinions on certain issues in when there are important decisions to be made. Decisions are made always based on somebody’s moral code, somebody’s values and, as there is a big portion of this country’s population that is of the Christian faith, we just want them to have access and bring their values to the table.

Do non-religious people who look for help with faith-based organisations run the risk of being proselytised? How do evangelical providers manage to adhere to the separation of church and state, if conversion is an essential ingredient for program success?

WCA: Social organisations do not question a person’s beliefs. Whenever a group receives grants by the government, the rules and restrictions are very strong. There are a lot of strict guidelines and contracts to sign. Most of the organizations don’t have a problem with that. They are willing to cooperate, because they want to provide social services to everyone who is in need. And it is the character of church and faith-based groups that they serve anyone who needs help no matter what race or faith this person has.

Is it fait to make faith-based organizations compete for funding with secular and public groups?