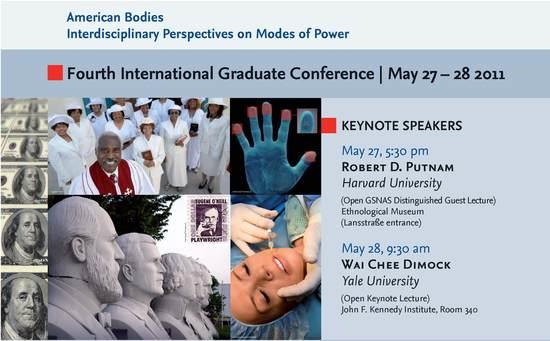 Bodies, both collective and individual, are the sites at which power is negotiated. Ideas surrounding embodiment and power are an area of crucial debate in America, dialogue that is characterized by its complexity and ambivalence. America is composed of bodies – political, economic, religious and social. They are surfaces on which images of ethnology, gender, age and beauty are inscribed and projected, they are situated in the space between the spheres of personal privacy and public security and they can be the source of stigmatization. Bodies govern and are governed. They experience exposure and insecurity. They are demarcated, historicized, institutionalized, narrated, theorized and visualized.

The Graduate School of American Studies’ fourth international conference will take a critical look at American bodies between 27 and 28 May 2011. The aim is to provide a forum for reflection on the metaphors, constructions and functions of American bodies. The topic will be examined in twelve interdisciplinary panels by a large number of international participants.

As part of the conference, two public lectures will be taking place. Robert D. Putnam, Malkin Professor of Public Policy at Harvard University, will give a lecture based on his most recent book, American Grace: How Religion Divides and Unites Us, about the influence of religion in America. The lecture, to be held at the Ethnological Museum in Dahlem, Berlin on 27 May 2011 at 5:30pm, presents the rare opportunity to hear the author of major contemporary academic works such as Bowling Alone: The Collapse and Revival of American Community and Making Democracy Work speak in Berlin.

On 28 May at 9.30am, Wai Chee Dimock, William Lampson Professor for English and American Studies at Yale, will open the second day of the conference program with a lecture titled "Here, Bullet: American Bodies at War.” In this keynote speech, Professor Dimock will engage thematically with the poetic responses to the two World Wars, as well as the Vietnam and Iraq wars. The lecture will be held in Room 340 of the John F. Kennedy Institute at the Free University of Berlin.

The Graduate School of American Studies’ fourth international conference on "American Bodies: Interdisciplinary Perspectives on Modes of Power” will take place from 27-28 May at the John F. Kennedy Institute at the Free University of Berlin. Further information, as well as the complete program for the conference, can be found at http://www.jfki.fu-berlin.de/graduateschool/conference/2011/index.html.

The number of attendees at the conference is limited. Please register your participation via e-mail by 24 May 2011: gsnas.conference2011@gsnas.fu-berlin.de