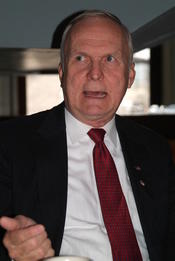 Would you briefly describe the work of Christian Coalition?

JB: We have 50 state chapters; and those chapters do the same thing I do, only I lobby Congress, and those people lobby state legislatures. And we all put out voter guides. In 2000, we distributed 73 million voter guides including three million in Spanish. We distributed them in churches mostly. So those voter guides helped quite a bit to bring new people – church people – into the voting books. And I do a lot of meetings with Congressman, Senators, Representatives on the House, and I try to get certain bills passed, and I try to stop certain bills.

What issues do you focus on?

JB: Well, the number one issue has basically always been abortion. And since 2003, when the Massachusetts State Supreme Court decided by four to three judges that homosexual marriage is legal in the state of Massachusetts. The American people said: no way, that is not going to stand. And people got mad and started passing state constitutional amendments. One of our other issues is judicial activism. We don’t want judges to decide what is supposed to go on in America. We want the state legislator and US-Congress to do that. So, abortion, homosexual marriage and judicial activism are probably our top three issues.

Are there issues over which you disagree with the Republican Party?

JB: Immigration. Because the leaders of the Republican Party and the Senate, John McCain, and the Senate Judiciary Committee are for amnesty basically. Most of our people do not agree with those Republicans on that issue.

JB: Well, a few years ago, Chuck Schumer, the liberal New York Senator, said: I am going to pass a bill, an anti-spam, anti-pornography bill. And he called Roberta Combs, president of the CC, who took Pat Robertson’s place five years ago, and said: Roberta could you help me out? And she said: Yes. She did some press conferences with him and some television appearances on NBC. And the NBC-reporter says: You guys are an odd couple- a liberal and a conservative woman. They were working together to pass something good. And we got it passed. And then Hillary Clinton called up Roberta. She wanted meetings too, to see if Roberta could support a couple of her things. So Roberta and me we meet with liberals, but mostly with conservatives.

The Christian Coalition has lost some influence in recent years: why is that?

JB: It goes back to the Republicans taking over in ‘94. That was a low period because the Christians thought: “We won, so we don’t have to work anymore”. Then the Republicans took over the White House in 2000 and 2004. And then they just sort of got comfortable, didn’t work anymore and didn’t get money anymore. So we are sort of in that kind of a period. Now, if Hillary Clinton becomes president, CC will go up again. (Laughter.) The money will just flow in, just like it did when her husband, Bill Clinton, was president.

But, you’re not just waiting for the Democrats to win, right?

JB: There’s immigration. And also the environment. Dr. James Dobson, from Focus on the Family, says that the Kyoto Treaty would hurt poor people, because the poor will loose jobs and there will be fewer jobs and corporations. And there are other people like Rev. Jack Heathen – he’s got a church in LA with 10.000 people -- he says we need to support the Kyoto Agreement. So there is controversy.

Is there competition among conservative religious advocacy groups?

JB: You know, there is sort of competition between Concerned Woman and Christian Coalition and FRC and Eagle Forum. But just sort of friendly competition. Just like the National Abortion Rights League competes with Planned Parenthood and National Organisation for Women. They and we usually are trying to get the same kind of members. But there are so many people on both sides. So we don’t really need to compete. And in fact, we all meet together three times a week, at least.

What do you think was the worst decision made by the Christian Coalition?

JB: Probably not selecting the right state chairman. Probably a few state chairman were not good and they just keep them on, and those state chairman make mistakes and get us in the news media too much because of their mistakes. And then CC national gets blame for a CC chapter in the states.

And what were the Christian Coalition’s best decisions?